By Bryan Pilati and Tyrone Minton

Developers, analysts, and others have long recognized the need for a new and improved pilot seat for the aging fleet of U.S. rotorcraft. Ongoing problems, such as an expanding pilot anthropometric demographic, increased flight duration, heavier survival gear loading, and overall aging of the current seat system, have increased the occurrence of chronic injuries to rotorcraft aviators [1]. To address these problems, The Protective Group (TPG) has been working since 2012 with the Joint Aircraft Survivability Program Office and the Army Combat Capabilities Development Command Aviation & Missile Center Technology Development Directorate – Aviation at Fort Eustis, VA, to develop a next-generation crashworthy Ballistic Resistant Adaptive Seating System (BRASS) for rotary-wing aircraft.

In 2015, the U.S. Congress also identified the need for improved rotorcraft aircrew safety and initiated the Advanced Helicopter Seating System (AHSS) program (which started as the BRASS project) [2]. In so doing, Congress directed not only the dramatic improvement of pilot ergonomics and comfort but also the increased performance of several key system capabilities, including whole-body vibration, energy absorption, ballistic protection, and autonomy.

The original intent of the AHSS program was to modernize the aging UH-60 fleet pilot/copilot seat solution. Over the course of that effort, new direction and support adjusted the design toward the AH-64 platform. As of this writing, the initial Technology Readiness Level (TRL) 6 technology demonstration (TD) units for the AH-64 have begun production and are scheduled to be tested in 2020. In addition, TPG has secured funding to continue the UH-60 development program begun under BRASS with the ultimate goal of a fully qualified seating system by late 2023. The AHSS TD units will be used to validate the claims of the various integrated components against a refreshed design specification. The findings of the TD tests will drive the UH-60 development and qualification efforts moving forward under AHSS and will ultimately serve as a springboard to U.S. Army Future Vertical Lift (FVL) platforms.

From the onset, the AHSS program has had the ultimate objective of reducing pilot fatigue and potential for injury while accommodating an ever-expanding pilot population. TPG has used the most recent Anthropometric Surveys [3] to drive the updated 5th– to 95th-percentile occupant dimensions. Consultation with the U.S. Army Utility Helicopters Project Management Office has yielded updated occupant gross weights in excess of those historically associated with rotorcraft pilots, expanding the maximum, fully equipped, occupant weight from 250 lbs to more than 330 lbs for the 95th-percentile male.

Another primary driver for the AHSS design was the 95th-percentile female hip width, which increased from 17.5 inches to 19 inches. Using the updated pilot anthropometric data along with the guidance of the “Full-Spectrum Crashworthiness Criteria for Rotorcraft” report [4], TPG began to investigate technologies that would allow for a compact, yet survivable seating solution within the notional aircraft constraints of the UH-60 and AH-64 platforms. Figure 1 provides a preliminary depiction of the AH-64 integration. 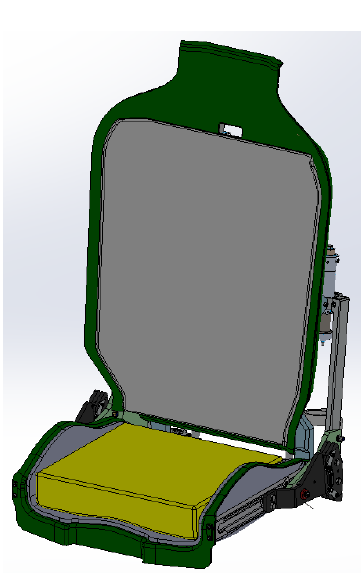 Typically, crashworthy rotorcraft seating has used simple, lightweight systems to accomplish the goal of energy attenuation. Unfortunately, those simple systems, while generally effective, do not adequately protect the broad envelope of users or cover the crash severity level necessary to advance the state-of-the-art in crashworthy seating technology. Thus, for AHSS, a variable load, automatically selectable profile energy absorber (EA) system (from the Arizona-based Safe Inc.) was chosen. This EA system allows for a significantly wider and on-the-fly adjustable energy attenuation system. It is controlled by a microprocessor to detect the occupant’s seated weight and seat height position and allow for the selection of an optimum energy profile, which will maximize stroke and minimize lumbar loading during a crash event.

In addition, given specific state data input from the aircraft, the EA system can be made to adjust profile selection immediately ahead of a predicted crash event, thus optimizing energy attenuation just moments prior to impact. The AHSS TD units will demonstrate the ability to modify EA profile in flight but will not include full autonomy under the UH-60 qualification effort due to a lack of data stream from that platform. Data systems will be designed around the UH-60’s data-bus and the FVL-compliant Open Architecture scheme.

As occupant-borne gear loads continue to increase, concern has also been raised about how this increase might affect lumber loading and ultimately the crashworthiness of the seat. To combat this additional loading, the AHSS has incorporated a modified flight vest with an automatic pretensioning restraint system. The integrated vest/restraint works to decouple the load attached to the vest and transfer that load directly to the restraint webbing.

This pretensioning system also acts to move the restraint closer to the occupant torso, minimizing the chance of the webbing crushing gear or potentially injuring the occupant. The system works similar to an ejection seat restraint in that it can retract any excess webbing and lock the standard MA-16 (from the Iowa-based Cobham Mission Systems) type of omnidirectional reel while also pulling the occupant into a more upright position before the seat begins to stroke through the EA. This prepositioning should aid in reducing any head strike and Head Impact Criteria (HIC) concerns around the seat location.

At the time the BRASS/AHSS program was initiated, several studies had been released relating aircraft vibration to long-term health effects in military helicopter pilots. These effects were found to equate to hundreds of millions of dollars in long-term medical expenses [1]. Accordingly, to combat whole-body vibration, the AHSS includes active vibration-dampening capability, which has been tested and flown in U.S. Navy UH-60S and -60R variants. This technology has been proven to reduce felt vibration below the 12-hr exposure limits set by ISO 2631-1 via flight and ground test (under contracts managed by the Naval Air Systems Command).The Active Vibration Attenuation Seat Suspension (AVASS) (from the Maryland-based InnoVital Systems) system uses a magnetorheological damper in the seat guide tube to counter aircraft vibration before it reaches the seat bucket. 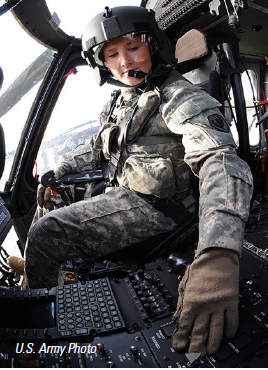 The primary mission directive levied on the AHSS program from inception has been to decrease fatigue and increase pilot endurance as mission durations have been steadily increased over the last few decades. To improve the ergonomic function of the seat, TPG has incorporated multiple independent adjustment points (both seat back and seat pan angle) as well as an improved cushion system (from Maryland-based LME) into the seat bucket. This incorporation acts to alleviate hot spots and pressure points under the ischial tuberosities while minimizing overall seated pressure. Working together with industry partners, the AHSS program has included a robust ergonomic study (using U.S. Army pilots) to determine the correct cushion configuration, yielding low pressures without compromising crashworthiness of the seat. Thermal transfer into and out of the cushion system was also taken into account to improve overall mission comfort.

TPG is leveraging many years of experience in the aviation armor field to develop a ceramic composite armor system that has reduced areal density over the legacy seating system for the same threat specification. Advances in material processing allow for a more complex ceramic component to better aid in seated ergonomics while mitigating the need for extraneous tooling and added manufacturing lead times. The proposed armor system comprises a boron or silicon carbide strike face encapsulated in a structural composite shell. The bucket is then lined with the newest version of ultra-high molecular weight polyethylene (UHMWPE) for fragmentation and spall protection. This modern composite armor approach is expected to yield an armored seat bucket approximately 20% lighter than the legacy system.

When discussing crashworthiness and capability, the issue of user error is a common theme. In current seat systems, the user is required to know his/her loadout weight and seated weight to properly adjust the energy attenuation system in the given aircraft. This simple system, however, does not account for seated height and the respective allowable stroke distance. It also does not allow for changes in flight or preceding a crash event. The AHSS will mitigate this user error by automatically weighing and monitoring seat position (to include back and pan angles) at startup (baseline, zero-power failsafe) as well as continuously throughout a mission to adjust the EA system for optimal safety of the occupant. In cases where the aircraft is able to provide vertical speed, orientation, proximity data, or any combination of those, the  seat will be capable of adjusting the EA profile ahead of a predicted crash or hard landing event.

TPG anticipates major leaps forward in airframe safety systems and plans to design placeholders in the AHSS that will accommodate those systems in the future. Capability such as crash prediction hardware or software can be used to preset the AHSS for a given predicted crash impulse, even if that event is as mild as a hard landing. It may also be possible to leverage the ongoing AHSS qualification effort to validate some of these emerging capabilities in conjunction with the seat system. Currently, the AHSS has a well-defined direction to airworthiness, but the program is open to expansion toward a fully universal architecture that can be used across many aviation platforms (FVL platforms included), as well as incorporated into any number of technology and safety capabilities required by an individual platform.

Mr. Bryan Pilati is the Project Engineer for the BRASS/AHSS projects at the U.S. Army Combat Capabilities Development Command Aviation & Missile Center Technology Development Directorate – Aviation. He has been with the U.S. Army for more than 34 years and is responsible for development of crashworthy seating, restraints, landing gear, and fuel systems across all Army aviation platforms. Mr. Pilati has B.S. in mechanical engineering technology from Old Dominion University and an M.S. in engineering management from George Washington University.

Mr. Tyrone Minton is the Program Manager for the AHSS project at The Protective Group (TPG) and has led the BRASS/AHSS programs since their inception in 2012. He has been with TPG for 10 years and is responsible for the development and integration of armor systems across multiple platforms, including the UH-60, CH-47, and CH-53K. Mr. Minton has a B.S. in aerospace engineering from Arizona State University. 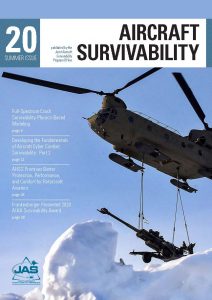