JASP Online > Journals > A Final Salute to the EA-6B Prowler: The Most Important Combat Jet Most People Know Little About

A FINAL SALUTE TO THE EA-6B PROWLER: THE MOST IMPORTANT COMBAT JET MOST PEOPLE KNOW LITTLE ABOUT

When the last EA-6B Prowler made its final bank over the North Carolina coastline and touched its wheels down on the runway at Marine Corps Air Station (MCAS) Cherry Point this past March, a lot of people may have missed it. However, the occasion marked not just the end of the line for the unique old warbird but also the end of a long and remarkable run in U.S. combat aviation.

For nearly 50 years, the primary duty of the Prowler—which was the longest-serving tactical fighter jet in the history of the U.S. military—was to quietly find and disrupt enemy radar, communications, and other signals to allow surrounding U.S. and allied air, land, and sea forces to successfully execute their missions. And the aircraft did just that through more than 260,000 hours of service and 70 different deployments, including in every major U.S. military operation over the last half century and against every major U.S. enemy from Ho Chi Minh to Isis [1, 2].

The Prowler (shown in Figures 1 and 2) first appeared as a follow-on to the A-6 and EA-6A Intruders in the skies over Vietnam in 1971. Distinguished by its insect-antenna-like refueling probe that extended from above its nose, this long-range, all-weather, multi-role jet was crewed by one pilot and up to three electronic countermeasures officers (or ECMOs). In addition, as shown in Table 1, the aircraft was powered by two Pratt & Whitney J52 turbojet engines, was carrier-capable, and could fire four AGM-88 high-speed anti-radiation missiles (HARMs) to suppress enemy air defenses [3]. 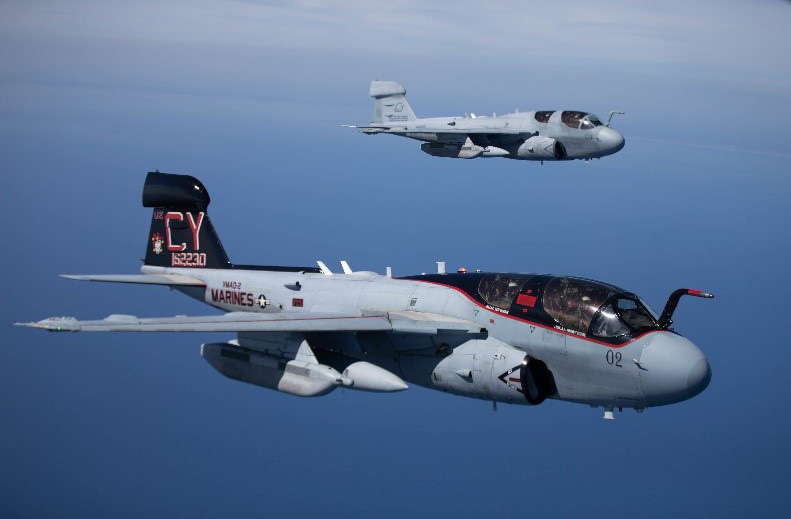 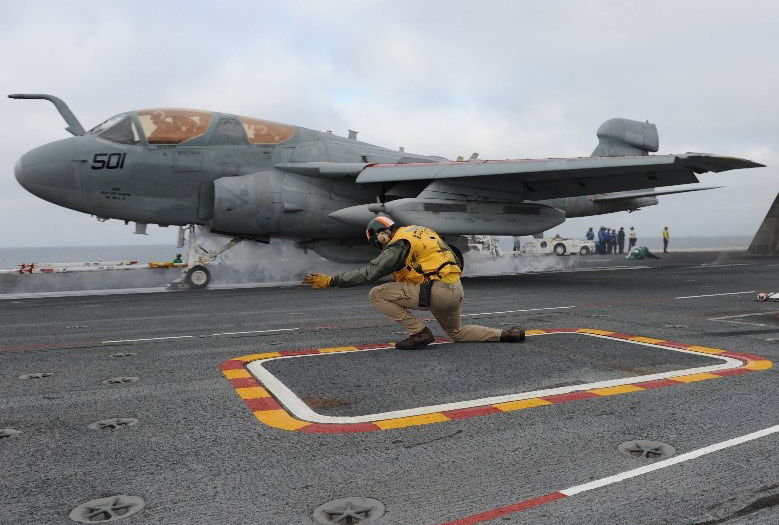 But arguably the Prowler’s most important equipment was its electronic countermeasure suite of tools, which were designed to intercept and jam enemy radar, communications signals, and weapon systems. This equipment included the ALQ-99 jamming pods, an on-board receiver, and the USQ-113 communications jamming system [3].

After the Air Force’s EF-111 Raven was retired in 1998 (and before the Navy’s EA-18G Growler appeared in 2009 to eventually replace the Prowler), the EA-6B was the primary (and virtually only, at times) provider of tactical electronic warfare (EW) support for all U.S. air arms. In later years, the Marine Corps also began putting LITENING targeting pods on the aircraft, and the Prowler took on the missions of overwatch and surveillance as well as jamming [2]. 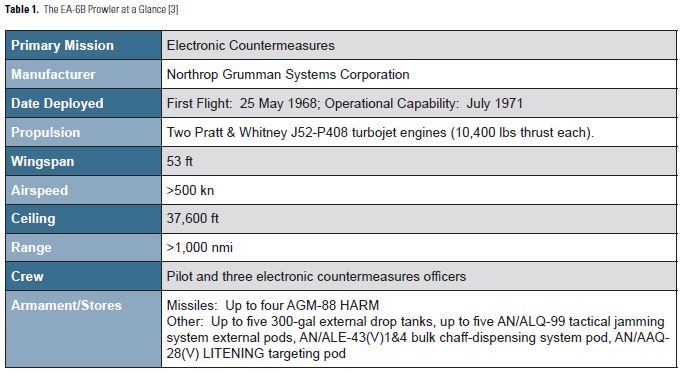 In addition to the radar-jammer’s remarkable record for longevity, the aircraft also amassed an amazing combat survivability record. Not a single one of the 170 Prowlers deployed in its 48-year service life was ever lost due to enemy actions [1]. Not in Vietnam, not in Grenada, not in Lebanon, not in Libya, not in Bosnia-Herzegovina, not in Kosovo, not in Panama, not in Somalia, not in Iraq, not in Afghanistan, not in Syria, and not in many other hostile places around the world.

Perhaps the aircraft’s greatest achievement, however, is not found in its self-survivability but in the longstanding large-force protection and survivability it provided to countless other vehicles and personnel that operated under its broad-area jamming umbrella. With Prowlers in the skies, five decades of American enemies often found themselves “electronically blind” to our forces and operations, as well as unable to communicate about, much less respond to, them. Even the F-35 Joint Strike Fighter, with its advanced capabilities and powerful EW suite, can’t make the same claim [2].

In addition, as U.S. stealth aircraft became operational, the Prowler played an important role in supporting their specialized missions. In fact, it is thought to be no coincidence that the only F-117 stealth fighter lost in combat during Operation Allied Force in 1999 came on a night when no EA-6Bs were providing jamming cover in the skies over Kosovo [2].

Furthermore, in the late-night raid on Osama bin Laden’s Pakistani compound in 2011, much attention has been given to the specially modified and stealthy Black Hawk helicopters that were used to sneak the Navy SEAL teams in and out of the area. What is not as well publicized, however, is that it was a Prowler that circled the area that night to keep any radar and electronic signals from potentially exposing the important mission before U.S. aircraft and personnel were out of harm’s way [1].

Who can really say how many actual aircraft and crew members were ultimately saved by the Prowler’s radar-scrambling capabilities over its nearly 50 years of service? That type of survivability metric is hard to quantify, but the numbers would likely be staggering. What’s more, for every aircraft that wasn’t shot down because of the Prowler’s efforts, consider how many additional aircraft, assets, and personnel were also potentially saved by not having to enter hostile territory to rescue downed aircrews. “In other words,” as one writer put it, “the EA-6B had a cumulative effect on survivability rates of American aircraft” [2].

And the beneficiaries of the Prowler’s capabilities were not just air forces. The Prowler was able to jam not only radar and communications signals but also signals from other sources, such as cell phone and garage door openers.

This capability would prove to be critical when remotely detonated improvised explosive devices (IEDs) emerged and began to threaten ground forces in Iraq and Afghanistan [2]. Without a doubt, the lives of many a soldier and Marine were saved by Prowlers preventing detonation signals from ever reaching their hidden IED receivers. And many of these Warfighters and others were none the wiser. Perhaps this is why the aircraft has been called “the most important combat jet that the public knows little to nothing about” [2].

To be fair, it’s not that the EA-6B hasn’t had its issues and incidents. It has. In fact, an estimated 50 Prowlers were lost due to accidents and mishaps during the aircraft’s lifetime [4]. One notable incident (pictured in Figure 3) occurred in 1981, when a Prowler crashed into the deck of the USS Nimitz, killing 14 crew members, injuring 45 others, and destroying or damaging 20 aircraft. Similarly, in 1998 a Prowler crashed into an S-3 Viking on the flight deck of the USS Enterprise, killing four crew members and destroying two aircraft [4]. More recently, a Prowler on a low-level training mission in 2013 crashed near Spokane, WA, killing three Navy air personnel [5]. 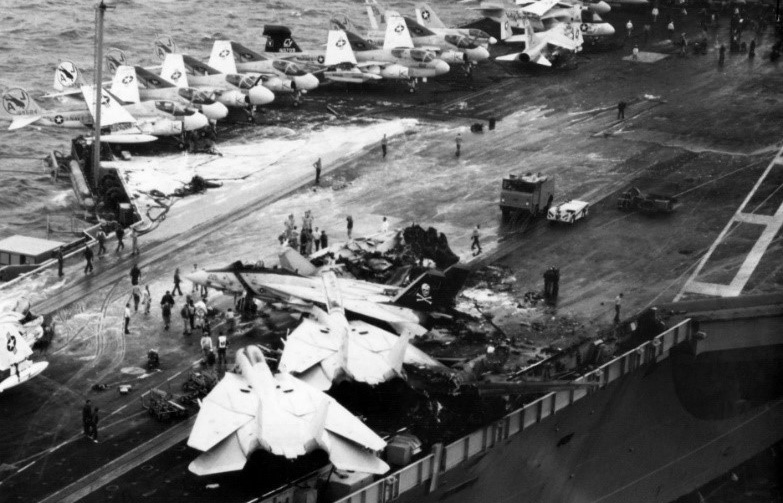 That said, the plane’s long-term proven record greatly outweighs its blemishes. But unfortunately, time (and technology) eventually catches up with everything. And so it was with this last surviving member of the “Grumman Iron” tactical jets. In July of 2015, the Navy retired the last of its Prowlers, leaving only the Marine Corps to fly the aircraft until March of 2019, when the one remaining Prowler Squadron—the Marine Tactical Electronic Warfare Squadron 2 (or VMAQ-2)—was officially deactivated at MCAS Cherry Point [2].

Technically, the Prowler’s very last sortie came a few days after its final flight and retirement ceremony at Cherry Point, when Lt. Col. Andrew Rundle, the commanding officer of VMAQ-2, piloted one of the historic planes to Washington, DC, where it will be displayed at the Smithsonian National Air and Space Museum [6]. And rightfully so.

“[The Prowler] may not have been on all the Marine Corps aviation posters,” Lt. Col. Rundle said, “but [it] certainly [has] been involved in just about everything that has taken place in an air war perspective for the past 40 years.”

And for that remarkable record of service, the aircraft survivability community salutes the EA-6B Prowler for a job well done. 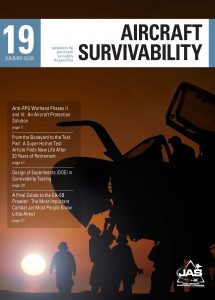