The Joint Combat Assessment Team (JCAT) remains busy with current combat damage assessments, the aircraft combat damage reporting initiative, refresher training, and qualification training.  In December, JCAT conducted a joint refresher training event at Aberdeen Proving Ground, MD.  The team conducted the live fire demonstration on an Army C-12 aircraft (shown in Figure 1), enabling the team to see first hand the effects of munitions and hydrodynamic ram on aircraft components.  The aircraft will be incorporated as a training aid in the Aircraft Combat Damage Forensics Laboratory at Fort Rucker, AL.  The C-12 is the first fixed-wing training aid to be used during JCAT Phase 1 training.

In addition, JCAT held its annual  Phase 1 training event from 29 January through 2 February at Fort Rucker.  In all, 24 (9 Army, 6 Navy, and 9 Air Force) personnel received an introduction to aircraft combat damage collection and assessment techniques (see Figure 2).  The products that this class produced were some of the best collection and assessment presentations that have been completed during this phase of training.  Congratulations to all the students for a job well done.

Finally, the Aviation Survivability Development and Tactics Team (ASDAT) bids farewell to CW4 Mark Chamberlin and CW3 Chris Crawford.  Mark served as the CH-47 subject-matter expert (SME) for more than 4 yrs, while Chris served as a UH-60 SME during his 2-yr assignment with the team.  The entire JCAT would like to thank Mark and Chris for their hard work and dedication and wish them luck as they move on to new assignments.  In addition, ASDAT is looking forward to the arrival of  CW4 Tyson Martin in July.  Tyson has recently completed the JCAT Phase 1 and Phase 2 training and will be a welcomed addition to the team. 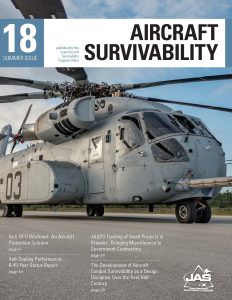