By: John Lazerlere and Brant Lagoon

Each Major Defense Acquisition Program (MDAP) is responsible for meeting its chemical, biological, radiological, and nuclear (CBRN) survivability requirements. However, addressing CBRN survivability is not intuitive. There are material, operational, logistical, integrational, interoperability, functional, and life-cycle requirements that must be assessed and addressed. And if not addressed properly, any one of these can cause programmatic hurdles that can increase cost and slow a program down.

In an effort to help MDAPs walk this minefield, the Department of Defense (DoD) issued DoD Instruction (DoDI) 3150.09, titled “The Chemical, Biological, Radiological, and Nuclear (CBRN) Survivability Policy,” in September 2008 [1]. As discussed elsewhere in this issue, DoDI 3150.09 states,

This instruction not only defined the term MCS but further outlined how such systems are identified and reviewed to ensure CBRN survivability in accordance with their survivability requirements. An MCS is any system that, if it were to fail or become a casualty, would severely degrade the probability of mission success. In April of 2015, DoDI 3150.09 was updated and reissued to include deterrence, noting that, “The force will be equipped to survive and operate in CBR or nuclear environments as a deterrent to adversary use of weapons of mass destruction [2].”

Established by Congress through the National Defense Authorization Act, Public Law 102-160, the Joint Program Executive Office for Chemical and Biological Defense (JPEO-CBD) is the principal advocate and single point of contact for all research, development, acquisition, fielding, and life-cycle support of CBRN Defense equipment and medical countermeasures. The JPEO-CBD established the MDAP CBR Survivability Support Team (SST) as the single point of contact to integrate CBRN Defense capabilities into MDAPs. The MDAP CBR SST concept supports the execution of DoDI 3150.09 and ensures consistent integration of CBRN capabilities across the Services by:

Since January 2011, the MDAP CBR SST function resides within the office of the Joint Project Manager for Protection (JPM P)—one of five JPMs within the JPEO-CBD. The mission of the MDAP CBR SST is to serve as the primary interface between MDAPs and the JPEO-CBD and ensure that CBRN Defense capability requirements are adequately addressed in a way that minimizes redundancy of effort across the DoD and improves platform CBRN survivability efficiently.

The MDAP support process (illustrated in Figure 1) includes numerous services and products that the MDAP CBR SST can deliver, including but not limited to the following:

Over the years, the JPM P has assisted programs at various stages in their acquisition life cycle. The following three aviation/aircraft-related programs are examples of how the JPM P has worked with MDAPs in using/modifying an existing CBRN Program of Record (PoR), establishing a new CBRN PoR, and demonstrating new CBRN capabilities/technologies. 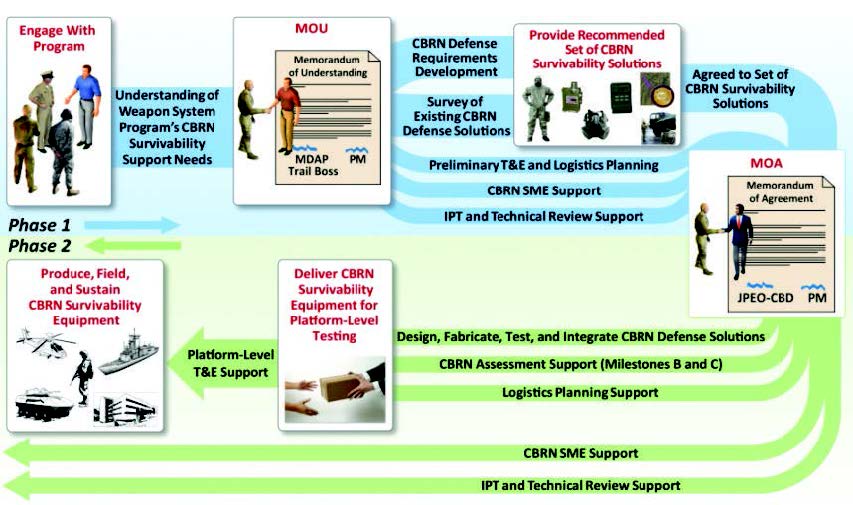 Using/modifying an existing CBRN PoR is one way MDAPs can capitalize on existing CBRN Defense systems and hardware. Tasked with addressing overarching chemical and biological (CB) contamination survivability and CB Defense requirements, the JSF Program Office (PO) coordinated with JPEO-CBD (becoming the first program with a live fire test requirement to do so). One of the solution sets for meeting CBR survivability was the use of the JSAM. When integrated with aircraft-mounted and pilot-mounted equipment, the JSAM-JSF (shown in Figure 2) will provide combined (simultaneous as required) hypoxia, CB, and gravity-induced loss of consciousness protection.

As part of this effort, the MDAP CBR SST was involved in establishing the Memorandum of Agreement (MOA) between the JSF PO and the JPEO-CBD. The MOA defined the roles and responsibilities of each party. This agreement was key for allowing the development of the mask prior to the January 2017 JSF CB Live Fire Test and Evaluation (LFT&E). 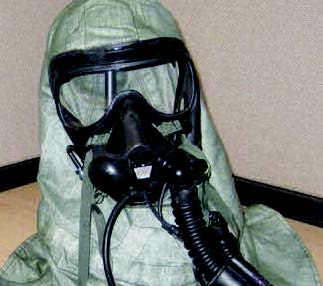 In some cases, there may not be a CBRN PoR to turn to in order to meet CBRN survivability requirements. Establishing a new CBRN PoR may be the best course of action, and the MDAP CBR SST, working through the JPEO-CBD, may recommend the establishment of a new program. The JBADS program was established from such a need. The JBADS is an acquisition program to meet DoD needs for decontamination of aircraft against biological warfare agents and other biological agents of concern. The initial JBADS will focus on a biological decontamination capability for the C-130 aircraft. The JBADS will be a capability set that includes an aircraft enclosure and decontamination units that provide hot, humid air (biothermal decontamination) to decontaminate biologically contaminated airframes to a minimum 6-log reduction level.

An aircraft biological decontamination capability was demonstrated under the JBADS Joint Capability Technology Demonstration (JCTD) in 2014. The MDAP SST Lead for Aircraft was designated as the Transition Officer between the JCTD and a potential PoR. As such, the MDAP SST was involved in reviewing the designs and provided funds to accomplish the JCTD. In addition, the MDAP SST reviewed the JCTD Operational Assessment Report and incorporated it, along with the Capability Development Document and the Lessons Learned, into the Performance Specification for the PoR.

The MDAP SST assisted the Joint Science and Technology Office in setup and scheduling and participated in a Technology Readiness Assessment (TRA) based on the JCTD results and prior testing of biothermal decontamination in FY15. Based on the TRA assigning JBADS a Technology Readiness Level (TRL) of 7, the JBADS entered the acquisition life cycle at Milestone B as of 9 May 2017. Development of the JBADS has the potential to impact future PoRs that are planned to address chemical decontamination capabilities and to decontaminate tactical platforms as determined by the Services.

As programs work toward meeting their CBRN survivability requirements, there may be a need for a new capability. Such was the case for the JSF decontamination system (illustrated in Figure 3). From the onset, JSF employed a systems engineering approach to CBR contamination survivability. The JSF PO

Through coordination early on in the acquisition process, the MDAP CBR SST can ensure that CBRN Defense capability requirements are adequately addressed in a way that minimizes redundancy of effort across the DoD throughout the life cycle of the platform. This process prevents duplication of effort, assists programs in achieving their CBRN survivability requirements, increases interoperability among the various platforms, and affirms that CBRN Defense systems are sustainable throughout the life of the platform.

MDAPs can also benefit from existing expertise and technical reachback that the MDAP CBR SST can provide. The team can help direct MDAPs to existing material solutions and serve as the gateway into CBD Program solutions. The team regularly interfaces with a network of technical experts in research, testing, evaluation, analysis, hardware development, engineering, integration, fielding, logistics, and many other areas. In addition, it routinely works with organizations within the DoD, academia, and private industry. This interaction can help take the burden and guesswork out of knowing how to meet program CBRN survivability requirements from program initiation through life-cycle management planning. Early involvement with the MDAP CBR SST is key to providing CBRN survivability with the best cost/benefit and least impact to program execution.

For further information or to receive assistance for facilitating research development, testing, procurement, operations and sustainment, and delivery of CBRN Defense systems in support of platforms designated CBRN mission-critical, as well as those requiring CBRN Defense capabilities, please contact the JPEO-CBD Public Affairs office at 703-617-2400 or usarmy. apg.jpeo-cbd.mbx.jpeo-cbd-public-affairs-office@mail.mil.

Mr. John Larzelere currently serves as the MDAP Platform CBR Survivability Lead for Ships and Buildings. He has 30 years of experience in basic research, equipment and hardware design and development, program management, and personnel management. This experience includes supporting the Marine Corps Operational Test and Evaluation Activity as the Early Test and Evaluation Lead. He also spent 6 months in Afghanistan supporting the Joint Expeditionary Forensics Facilities and the Security Force Advisory and Assistance Team, as well as 4 months in Japan supporting Operation Tomodachi. In addition, Mr. Larzelere has conducted research on filtration technologies and holds a patent in fan rotor design. He has a B.S. in mechanical engineering from North Carolina State University.

Mr. Brant Lagoon is currently the MDAP Platform CBR Survivability Lead for Aircraft and Transportable Systems. He is the Systems Engineering Lead for the Joint Biological Agent Decontamination System. He has worked in chemical and biological protection systems for 15 years, beginning as an active duty Air Force Project Manager for collective protection systems. After working with protection and filtration system in industry for several years, he became a physical scientist for the U.S. Army Natick Soldier Research Development and Engineering Center. Mr. Lagoon holds a mathematics degree from the University of St. Thomas. 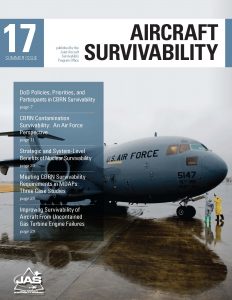