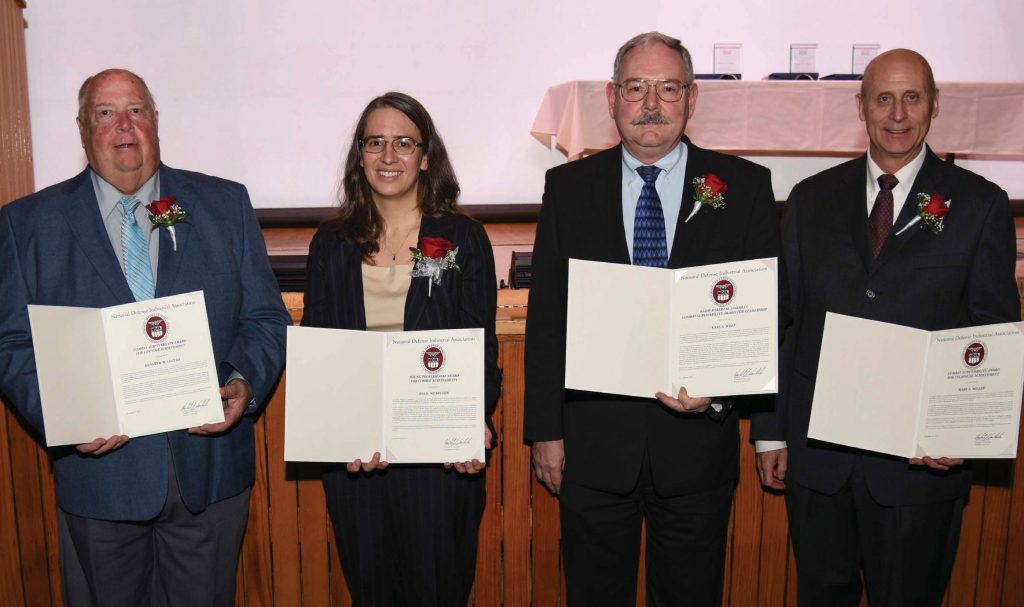 This inaugural award was named for the NPS’s Distinguished Professor Emeritus Dr. Robert E. Ball, the quintessential aircraft survivability expert, educator, and mentor. As mentioned previously, the award is presented to an early- to mid-career person who has made a significant technical, analytical, or tactical contribution to any aspect of aircraft survivability. “Early- to mid-career” is defined as 35 years of age or younger at the time of award.

This award is presented to a person who has made a significant technical contribution to any aspect of survivability. It may be presented for a specific achievement or for exceptional technical excellence over an extended period. Individuals at any level of experience are eligible for this award.

Mr. Mark Miller, an aircraft design and observables subject-matter expert at Lockheed Martin Aeronautics (“Skunk Works”), was presented this year’s award in recognition of his sustained technical leadership in the development of stealth technologies and their integration into survivable weapons systems, such as the first operational manned very low observable aircraft, the F-117A; the pathfinding Darkstar (or Tier 3 Minus) unmanned air vehicle program; as well as numerous other manned and unmanned aircraft that cannot yet be acknowledged.

The Gormley award is presented to a person who has made major leadership contributions to combat survivability. The individual selected must have demonstrated outstanding leadership in enhancing overall combat survivability or played a significant role in a major aspect of survivability design, program management, research and development, test and evaluation, modeling and simulation, education, or the development of standards. The emphasis of this award is on demonstrated superior leadership over an extended period of time.

Mr. Carl Wolf, a Naval Air Systems Command (NAVAIR) and Air Force senior aircraft program manager and survivability technology expert, was presented this year’s award in recognition of his sustained leadership roles in the transition of stealth technologies from development to operational status in weapons, as well as manned and unmanned aircraft programs for both the Air Force and the Navy. His leadership has contributed to the combat survivability and effectiveness of numerous aircraft, including the A-10A, F-16A, F-15C, F-117A, B-2A, F-35, the Presidential helicopter, and the Air-Launched Cruise Missile. His 40-year military and civilian career included key senior leadership positions within the Assistant Secretary of the Air Force for Acquisition (SAF/AQL), NAVAIR, and the Air Force Rapid Capabilities Office.

This award is presented to a person who has made significant technical and leadership contributions throughout his/her professional career, spanning many or most of the numerous facets of aircraft combat survivability. This award is nominated by the executive board and is intended to recognize an individual’s lifetime of accomplishments and dedication to the aircraft survivability community, as well as the aircrews we all serve.

This year’s lifetime achievement award is presented to Mr. Kenneth Foulke from NAVAIR (retired) in recognition of his susceptibility reduction expertise and his more than 54 years of military and civilian service and leadership in combat survivability technology development and integration. Mr. Foulke is an acknowledged expert and leading force behind Navy stealth technologies and designs, with extensive experience in every aspect of low radar signature programs, from concept formulation and design to specification and test to production line quality assurance and maintainability.

Congratulations to all four of our 2017 awardees for their many accomplishments and contributions.

It is not too early to consider who among our ranks is deserving of recognition this coming November at the 2018 NDIA Aircraft Survivability Symposium, which will again be held in Monterey, CA. Who among your own staffs and organizations has demonstrated technical or leadership achievements in the survivability community and is deserving of consideration for one of these annual NDIA awards? The CSD will publish award nomination deadlines and submission procedures later in 2018, but there is no need to wait to make a nomination or to discuss the process further. Please contact Mr. Robert Gierard at robert.a.gierard@raytheon.com or 310-200-1060. 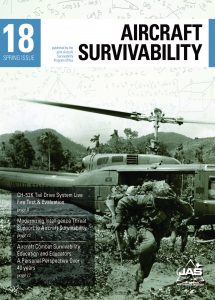