In November 2016, the National Defense Industrial Association (NDIA) Combat Survivability Division (CSD) Awards Committee, joined by the division founder RADM Robert Gormley, presented its Combat Survivability Awards during the group’s annual Aircraft Survivability Symposium at the Naval Postgraduate School (NPS) in Monterey, CA. The awards were given in recognition of superior contributions to combat survivability in the areas of leadership, technical achievement, and lifetime achievement.

The Gormley award is presented to a person who has made major leadership contributions to combat survivability. The individual selected must have demonstrated outstanding leadership in enhancing overall combat survivability or played a significant role in a major aspect of survivability design, program management, research and development, test and evaluation, modeling and simulation, education, or the development of standards. The emphasis of this award is on demonstrated superior leadership over an extended period of time.

Mr. Joseph C. “Jay” Rodgers, U.S. Navy Naval Air Systems Command (NAVAIR) Senior Aircraft Survivability Engineer and Associate Fellow, was presented with this year’s Gormley award in recognition of his leadership roles as a Marine pilot and commander; as an aircraft developer, tester, and program manager; and as a contributor to many different aspects of aircraft survivability—from research, development, and acquisition to combat employment. Throughout Mr. Rodger’s career, he has been recognized by his peers and leadership alike for his unmatched work ethic, pursuit of excellence, and wide spectrum of knowledge and experience.

This award is presented to a person who has made a significant technical contribution to any aspect of survivability. It may be presented for a specific achievement or for exceptional technical excellence over an extended period. Individuals at any level of experience are eligible for this award.

This award is presented to a person who has made significant technical and leadership contributions throughout his/ her professional career, spanning many or most of the numerous facets of aircraft combat survivability. The recipient of this award is nominated by the executive board in recognition of an individual’s lifetime of accomplishments and dedication to the aircraft survivability community and to the aircrews the community serves.

This year, the committee recognized Dr. Tilden N. “Mike” Mikel, former Vice President and Chief Engineer – Military Programs, Bell Helicopter Textron, for his more than 40 years of military and civilian involvement in the combat survivability community. Dr. Mikel has served as an attack helicopter pilot and a command and staff officer in the U.S. Army, and he transitioned to ever-increasing technical and programmatic responsibilities for the development and sustainment of numerous Army and Marine rotary-wing programs at Bell. In addition, his continuing and tireless support of the many activities, goals, and ideals of the CSD has significantly contributed to the development of generations of aircraft survivability experts, as well as the impact of this community on the survivability and mission effectiveness of our aircraft and aircrews.

Congratulations to all three of our 2016 awardees for their many accomplishments and contributions.

It is not too early to start considering who is deserving of recognition this coming November at the 2017 NDIA Aircraft Survivability Symposium, which will again be held at NPS in Monterey, CA. The CSD Awards Committee encourages community members to consider individuals in their staffs and organizations who have demonstrated technical achievements or leadership in the survivability discipline and are thus deserving of nomination. Nomination deadlines and submission procedures will be published later in 2017. But there is no need to wait; the committee is happy to discuss and accept nominations now. To make a nomination and/or discuss the process further, please contact Mr. Robert Gierard at robert.a.gierard@raytheon.com or 310-200-1060.

Robert Gierard is Chairman of the NDIA CSD Awards Committee. 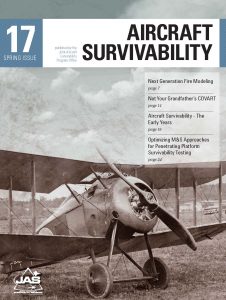